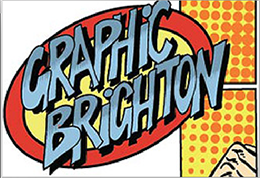 University of Brighton College of Arts and Humanities present the third annual Graphic Brighton symposium with its 2016 theme of Conflict and Resolution, to connect with the Great War Centenary.
The symposium is aimed at scholars, creators, publishers and readers of sequential narratives, and follows successful conferences in 2014 and 2015, which featured such guests as Hannah Berry, John Higgins, Karrie Fransman, David Lloyd, Pat Mills, Chris Riddell and Emma Vieceli, discussing their work. This year’s conference dates are 9th and 10th December 2016.
For Graphic Brighton 2016, in addition to a practitioner based day, we are introducing an academic strand and welcome papers in response, but not limited, to the following topics: