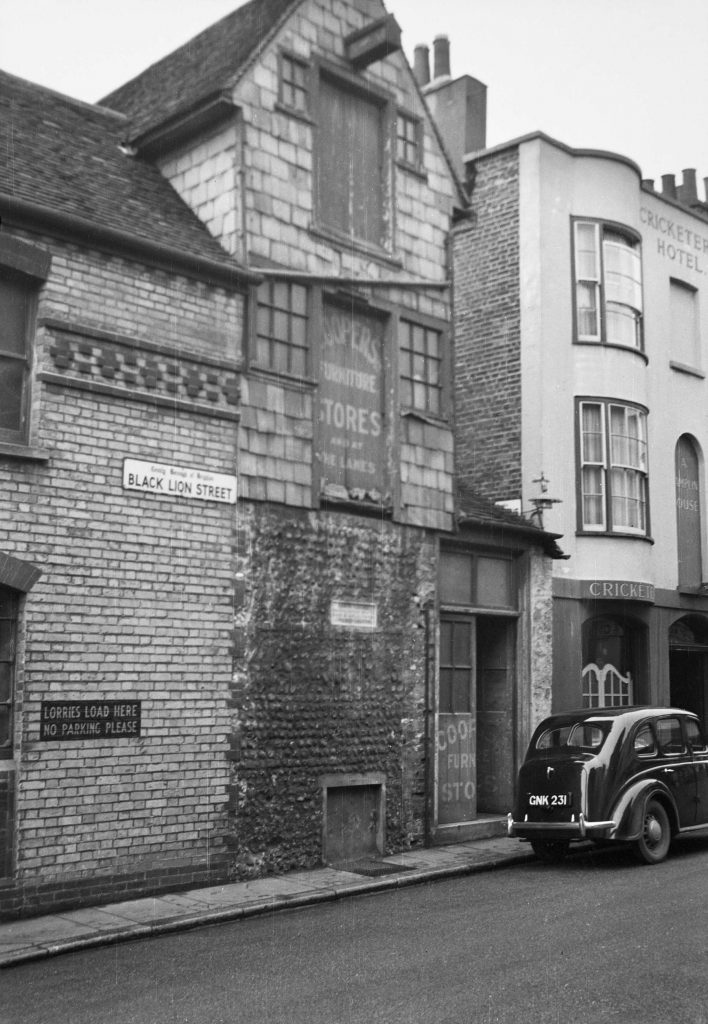 Pleased to see two Brighton landmarks in this list of old breweries of note in the UK just published in the Built to Brew document from Historic England. This links in nicely with our Ale and Hearty project from 2014, although a shame that Harveys Brewery in Lewes wasn’t mentioned.
The two Brighton ones depicted are the old brewery on Black Lion Street, Brighton and a long gone one we’d never even heard of in old Portslade village.
The Black Lion Brewery in Brighton is said to date from the mid 16th century, although the buildings we see in this late 1960s view are probably early 18th century. Door openings on first and second floors allowed brewing materials to be hoisted up and into the brewery. It was once owned by Flemish refugee Deryk Carver who was burnt at the stake in Lewes in 1555 for refusing to recant his Protestantism. He was put in a barrel before his execution in order to mock the brewing profession. The Black Lion was rebuilt as a facsimile in 1974, but the cellars beneath, which may be 16th century, still exist.
The middle of the 19th century was a crucial period for the development of brewery architecture. With the introduction of steam power around the start of the 19th century came the professional brewery engineers who rapidly rose to dominate the field of brewery design and construction. One such practice was Scammell and Colyer who designed the Portslade Brewery in Brighton for Dudney & Sons in 1881. The most distinctive feature is its tall, detached, decorative chimney with a massive base sporting the company logo entwined with barley stalks and bunches of hops.
Read more about beer and breweries in Built to Brew: The history and heritage of the brewery, written by architectural historian Lynn Pearson and published by Historic England in 2014.